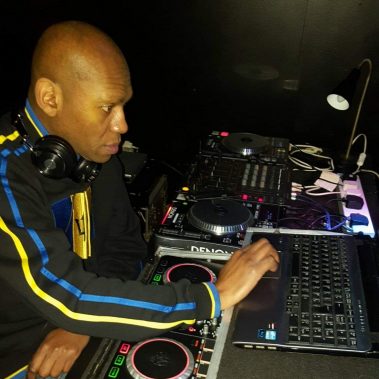 Victor Clarke, better known as VC, has an eclectic knowledge of music spanning several decades which he mixes to create a listening experience second to none. Originally hailing from Bradford, his love of music started at an early age and soon led him to the pirate radio scene where he grew a strong listening base within the Soul, Reggae and HipHop community. For a time, between (1991- 2013) VC was based in the Midlands working venues and presenting radio. It was here he worked on Radio Harmony and was mentored by the legend Barry Curtis (one of the UK’s first black presenters on BBC Radio). He also worked on Buzz FM Birmingham which later became known as Choice FM Birmingham. Working alongside Simon (schooly) Phillips (Jazz FM/Magic Soul), Leona Graham (Absolute Radio) and Sacha Brooks (Capital Xtra) he has been able to hone his skills into the seamless and fluid delivery of music he delivers on Global Soul.

As a DJ VC has a strong presence, whether it’s when he’s presenting live streams on Facebook, Mixcloud or on radio he has a unique style, confident and calming voice. He deliver tunes in a way that makes you pay attention and take notice. For those who follow his livestreams he’s been described, occasionally, as doing a ‘marmite’ section. This is where the magic happens and VC comes into his own. Unlike some DJ’s who rigorously plan their shows in advance, VC allows himself to be guided by the music allowing it to take him into an unexpected yet euphoric Realm (literally)…or if you like… winging it!

One of VC’s principles is to always give all credit to each and every artist no matter what. After all without the tunes, provided by the plethora of talented artists out there, the role of the DJ would be devoid. Residing back in the North VC joined the Global Soul family where he delivers past, present and
future soul. More recently he has produced his own remixes and continues to spread the love of quality music with passion and fieriness.