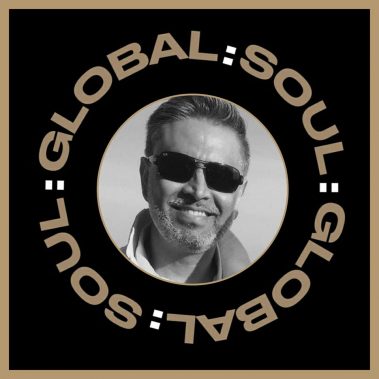 Not an avid clubber or weekender, Nilesh was instrumental in starting and running the Distincshun Roadshow back in the early 80s. Alongside his ever present brother from another mother Onx, they were always rigging up speakers and playing out to the soulsters of West London.
Family life took over and the music went into storage. It wasn’t until 2008 when it all started up again. Behind The Groove was born and once again venues were filled with eager soul boys and girls keen to relive the music of their youth. Greg Edwards, John Morales Ash Selector,Jon Jules and a host of some of London’s top Dis have all shared the turntables, Beggar & Co, The Real Thing, Howard Johnson, Omar and Janet Kay to name a few who have performed.
He has been co-presenting on JFSR for over 8 years.
Nilesh has started digging and buying more and more vinyl from the 70s 80s and adding to his collection. “Albums are where the gems are, the real hidden gems of yesteryear ” he says.
Mark ‘Snowboy’ Cotgrove’s book “From Jazz Funk & Fusion to Acid Jazz ” features Distincshun’s involvment in the early days of the black music dance scene in London.